GDPR in action: Facebook explains why they target surfers

IGTV is a platform available since May 2018 on Instagram which allows users to post longer videos, up to 60 minutes. It is mainly used by influencers for behind the scenes, unpacking, styling advices, cooking recipes, travelling videos and many other topics requiring longer videos than the 120 seconds allowed in Instagram feed or Instagram stories.

Accessing IGTV is easy. You just need to connect to your Instagram account and to click on the IGTV logo on the top right of your screen. You can then enjoy all the videos of your favourite influencers and Instagram creators.

Until now, IGTV has mainly been used by advertisers in collaboration with influencers who would showcase or review their products. However, now it is also possible to create regular ads on IGTV.

Even though Android and IOS are the two most popular mobile operating systems, their location settings work differently.

Android: you have an ON/OFF switch button that allows to decide if you want to share your location, or not.

IOS: you have the same options; share your location, or not, but you also have the additional option to decide if you want your location to be shared whenever the Facebook app is in use.

Therefore, it is not clear whether or not the location of Android users is tracked when they are using the Facebook app.

Facebook recently announced an update on how they collect and store the location information from users on Android.

With the new update, users will be able to choose if they want to share their location, even when they are not using the app (see screenshot below). 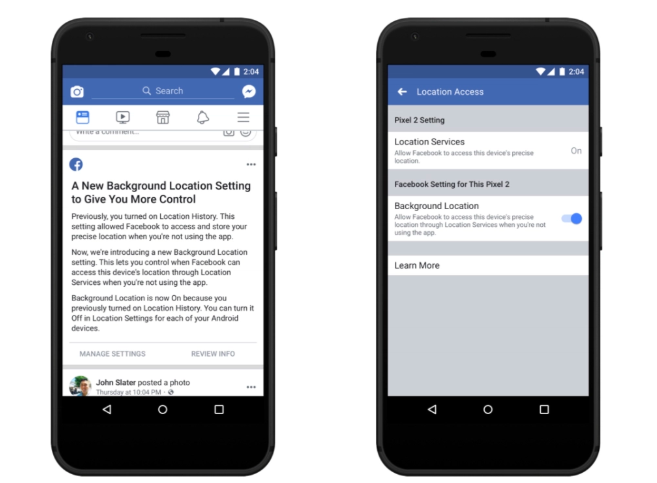 However, you will get a message from Facebook only if you activated the location feature in the past; Facebook will ask if you wish to keep your location information like this, or if you whish to switch it off.

If you have never turned the location feature in the past, it will remain on off unless you decide to turn it on willingly.

Quality of creatives on Facebook is critical for their results. Facebook algorithm rates all ads assigning them a score ranging from 1 to 10, based on the estimated relevance. Facebook ratings takes into account he quality of the visuals, the texts, and the relevance of the ads for the targeted audience. For example, if an ad for children's clothes is displayed to people who have no kids, the relevance score is obviously going to be low. Ads with high relevance scores are more likely to be displayed  and get lower CPMs.This may lead to performance underdelivery.

Unfortunately, it is often uneasy to know exactly what makes relevance scores high or low.

A new tool called Facebook Creative Compass is aimed to solve the issue. This tool will analyze 13 criteria that influence quality, relevance of the visuals and the texts and rate them as  "high, medium +, medium, medium – or low".

These 13 criteria are as follows:

Unfortunately the exact definitions of some of these criteria are not disclosed yet, even if mock-ups are already available (see above).

Facebook Creative Compass is said to be deployed this year (2019) without any more details at this stage.

GDPR in action: Facebook explains why they target surfers

It is likely to be a result from the GDPR implementation. In the screen shot below, Facebook justifies why they display an ad based on the surfer's charateristics and the targeting requirements of the advertiser.

Worth noting: this means everyone may therefore be aware of the targeting criteria of any campaign, including competitors of the advertised brand.

Video consumption is evolving quickly, especially on mobile. As a result, Facebook is implementing different advertising solutions in an attempt to adapt to the video content behaviours across its platforms.

So they identified 5 types of video consumption, as shown in the graphs below:

At Facebook they are updating their video metrics focusing on total amount of time a video was viewed) and they are also introducing new reporting for video plays. In the meantime, they remove some old KPI for more compact reporting.

On Facebook, you can rewind a video ad, or watch it several times. Previously, Facebook was calculating each view as unique, even if one single user would watch a video ad 3 times. Advertisers have complained about this and said that they’d rather have more accurate metrics of unique viewers, even if this means lower views generated in the end.So from now on, even if you watch an ad 3 times, it will be counted as 1.

Since the videos start playing automatically, one impression should equal one video view. However, if a user’s phone is on low battery, or has low internet connection, the video will not start automatically and there will be a gap between impressions and video views. Therefore Facebook introduced a new KPI into its Business Manager: Video Plays metric. They are also associating with MOAT to introduce this new KPIs into their platform.

Those two KPIs: 30 seconds video views and video percentage watched are not in the business manager anymore. Instead they introduced the "2 seconds continuous video views" metric, that is assumed to be more relevant.