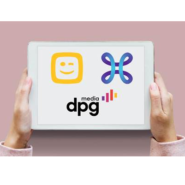 Next to SBS, DPG Media has now come to an agreement with Proximus on addressable TV. This precise means of targeting is now available on all Flanders, since the 2 major providers there, Telenet and Proximus, have the capacities to directly address setopboxes of their respective susbscribing homes.

For perspective, table below shows the declared household penetrations of cable providers by region: 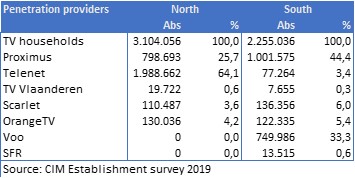 As of June 2020, local ad breaks in the FM programme flow on NRJ may be replaced by specific online ads when people are listening to it via Web. This replacement is available twice per hour. 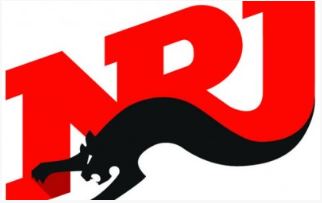 In synergy with DH Radio, La Libre is now extending its content to audio. Topics announced cover politics, economy and culture. The podcasts may be accessed either through the site or the App. The sales house IPM Advertising also foresees advertising opportunities. The other title from IPM, la Dernière Heure, is expected to follow soon.

Podcasts are a trending topics for (originally print) publishers. According to the last Establishment Survey from CIM, more than 950.000 French-speaking adults declare they have listened to podcasts more or less recenty.

March 2020: DPG Media recycles the linear channel of former VTM Kids Jr. This new channel is reported to be dedicated to series, Flemish and international. It will showcase the "Walter presents" that was until now only visible through VTM GO, featuring fiction series in other original languages than English. Thematics will differ by weekday: fi crime on Monday, action on Thursday (fi SWAT) and fantasy/horror (fi Blood Drive) on Friday. Next to that series as Clan, Cordon, Zuidflank and Mr. Robot will be frequently aired with multiple episodes per evening.

RTL Belgium (RTL-TVI, Club RTL, Plug RTL, Bel RTL as well as Radio Contact), has announced an agreement with Proximus when it comes to the distribution of their channels on the digital platform Pickx from Proximus. Initially seen as a threat by many content publishers, the aggregation platform of Proximus now seems to to have given enough guarantees to broadcasters. The VOD platform of RTL, RTL Play is reported to be directly visible on Pickx, as the Auvio solution from RTBF when the new decoder V7 is implemented

To date, only DPG Media has not reached an agreement with Proximus. VRT, RTBF and now RTL have. Initially Belgian broadcasters complained about Pickx as the new platform was said to work "à la Netflix" with a thematic interface and a recommendation algorithm that publishers regarded as a threat for their own content structure. It seems that the amended version of Pickx is closer to their wishes.